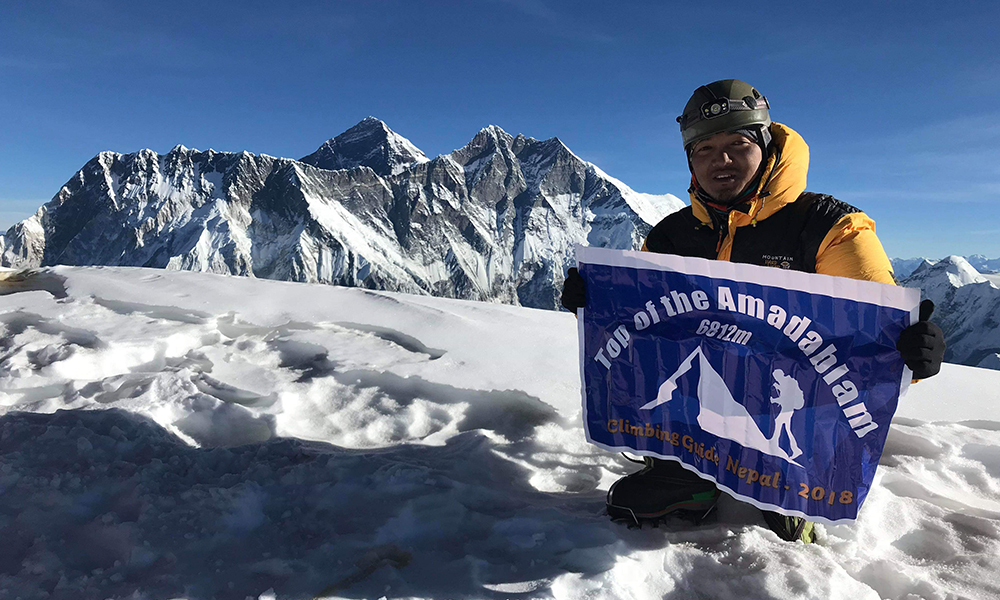 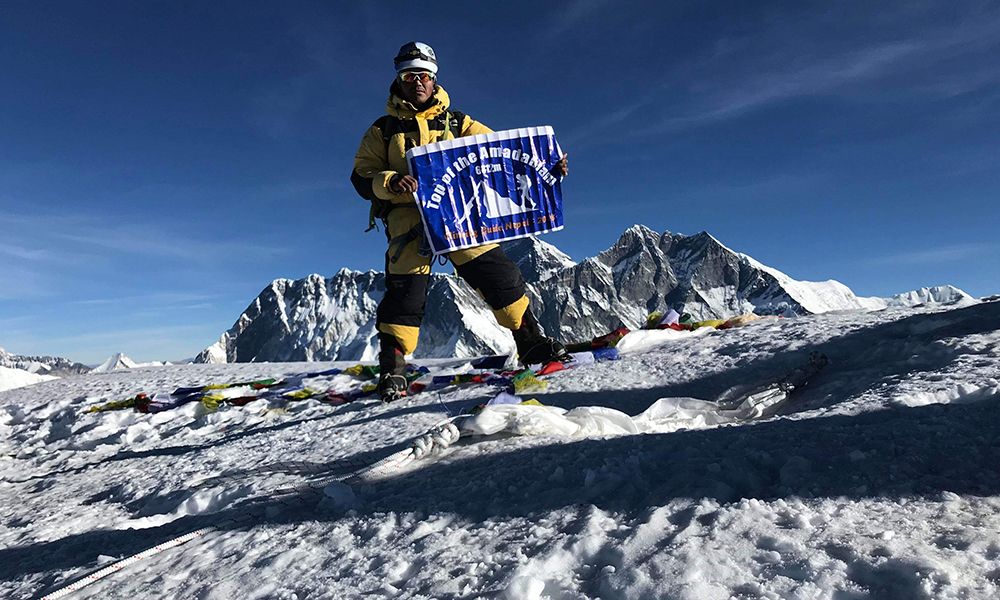 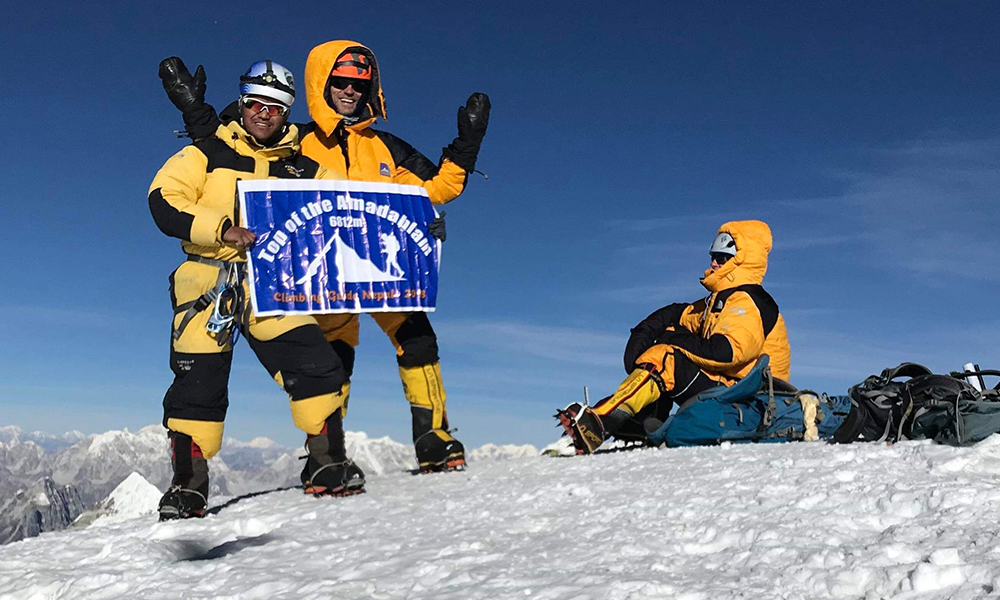 Mt.  Ama Dablam might not be the most beautiful mountain on Earth; it is undoubtedly one of the most sparkling and desired expeditions in the world. For backpackers who have explored Everest Base Camp, they are certainly no stranger to this one mountain. This figure towered beautifully in the eastern sky of Khumbu Everest as if to enchant anyone who crossed the area.

The imposing pyramid of Ama Dablan, located in the heart of the region Khumbu next to the Matterhorn and KhanTengri, is considered one of the most beautiful in the world. Technically, it has ice, rock, fixed rope roads, breathtaking views, fascinating peaks and a base camp located in a meadow between streams that make the adventure something worthwhile. Due to its own characteristics, the adventure becomes both stimulating and exciting.

Ama Dablam means mother’s necklace. Two long ridges located on the right and left of Ama Dablam mountain are like the hands of the mother “Ama” who protects her child. Whereas glaciers hanging on the western side of the mountain are likened to pendants of “Dablam” necklaces which are usually worn by female Sherpas there.

Amadablam Expedition with the height of 6,812m requires solid skills of rock climbing, ice climbing, sufficient experience of high altitude and general technical competency. The expedition team pioneered the South West Ridge –  Southwest Ridge  , which later became a popular route to reach the peak of Ama Dablam. A hiking trail with the classic Himalayan method is impressive and relatively safe compared to several other lines.

Typically, the climb is done with 3 camps along with ridges. Camp 3 is normally settled just below and to the right of the hanging glacier, the Dablam, so that any ice that calves off the glacier typically moves away from the camp. Best months for climbing are April-May before the monsoon season and September-October, after the monsoon.

One of our representatives will receive you at the arrival exit of Tribhuvan International Airport in Kathmandu and drop to your hotel. Relax in your hotel room for the rest of the time or you can just wander around the beautiful streets of Thamel. At night, you can enjoy a delicious traditional welcome dinner.

Explore the sights and sounds in Kathmandu valley / Trek preparation.

After breakfast in hotel, we may roam around nearby areas and go on some shopping for our adventurous trip the next day. We will also discuss on the nature of expedition, equipment and team composition. After a day of approaching the native culture, we will return with the fall of the night to the hotel.

After breakfast, you will be transferred to the airport, from where we take a short scenic flight to Lukla. Lukla is a small place, with a modest runway compared to others. Due to its geographical conditions, there are limitations for this particular airport. Arriving at Lukla, we will start our journey from there to Phakding. We will spend the night in a guest house.

Trekking begins after breakfast. We entered our second day of trekking. We will prepare ourselves and will warm up thoroughly for the day of the walk that awaits us. Following our way from Phakding, we will arrive at Namche Bazaar, a paradise for climbers. This enclave is the gateway to the Himalaya Everest Region of Khumbu. We will sleep in a guest house.

This is the day set aside for acclimatization. We will take a short walk to get a spectacular view of Everest, instead of staying inactive. We will wake up among sounds of cowbells of the yak, and with the light of dawn revealing the high mountains that surround us. We will be captivated by the presence of Kwangde (6380m), Thamserku (6608m) and Kangtega (6685m).

Despite visiting one place after another, the excitement is felt in the air, in a slow and quiet ascent to the highest hotel in the world: the Everest View Hotel. This hotel offers us a privileged place from which to admire the first sight of the dazzling Everest (8848m) and other famous peaks of the Himalayas with Nuptse (7,861m), Lhotse (8414m) and Ama-Dablam (6856m). We will return to Namche Bazaar and we will stay there one more night.

We will continue advancing on our Everest route. We will pass through several settlements and cross the Dhudh Koshi river. On the way we will be accompanied by magnificent views of the high peaks such as Everest, Lhotse, Nuptse and Ama Dablam. After a steep climb, we arrived at the Buddhist monastery of Thyangboche. We will have time to explore the monastery and take a look at its surroundings. After descending to the village of Deboche, we will spend the night there.

We will hike to another village called Pangboche on our way to Pheriche. Pangboche is a scenic village surrounded by Everest to its north, Ama Dablam, Thamserku, and Kangtaiga to the east, the Kongde range to the south and the Imja Tse River flowing through the wide fertile valley. We will continue ascending to spend the night in Pheriche.

Another day for acclimation. The terrain is more suitable for the conditions that require a more intense walk. We will climb a slope that overlooks the high valleys of the Himalayas. In the afternoon we will receive very valuable information about the altitude at which we will move from this moment.

Day hike back to Pangboche and to cross the Dudh Kosi River. We will ascend to the base camp of Ama Dablam, which will be at an altitude of 4,570 meters. We will stay there to spend the day of acclimatization facing the march that awaits us and organize the next route.

Acclimatization and Pre-climb training at Ama Dablam Base Camp

Our guides will provide training on peak climbing techniques and the best ways of using climbing gear such as the ice axe, climbing boots, crampons, harness, ascender, etc. The training will also include using ropes for climbing both up and down. The training will boost our confidence and climbing skills, thus increasing our chance of a successful summit of the mountain. Overnight in Ama  Dablam Base Camp.

Using the previous experience of the guides and members of the expedition, we will draw the best road map based on weather and specific situations. It may be necessary to delay the ascent and wait at the base camp to organize the food, ensure better acclimatization and practice mountain and climbing techniques.

There are three camps above the base camp before reaching the summit. Getting to camp 1 from the base can be complex depending on your abilities or preparation. From then on, we will have to use ropes, whether existing ones or those we are fixing. From camp 2 to camp 3, most of the terrain is ice and mixed climbing. Climbing is less technical and relatively more accessible. By day 26 we will have reached the top and will return to the base camp.

We trek back to Thyangboche, Namche Bazaar and Phakding to finally reach Lukla.

Fly back to Kathmandu

For this day we will take an incredible flight from Lukla to the Kathmandu valley. Enjoy this exotic experience and the incredible panoramic views of what you just went through during the trek. Explore Kathmandu at night or take the opportunity to spend a quiet night of well-deserved rest.

After a few days so intense, play free day in the city of Kathmandu. You can go sightseeing or take advantage to do some shopping, make the most of your last day in Kathmandu! At the end of the night we will return to the hotel to enjoy a cultural show during the farewell dinner.

Your adventure in Nepal comes to an end today! There is nothing to do but trade emails with your travel companions and organize your photos. A representative from Himalayan Glacier will take you to the airport, approximately 3 hours before your scheduled flight. After thirty days of unforgettable memories, we put an end to this beautiful adventure in Nepal.